Kabri Dahar (Somali: Qabridahare) is a city in the eastern part of Ethiopia known as the Ogaden. Located in the Korahe Zone of the Somali Region. The Kabri Dehar University (website is www.kdu.edu.et) is a newly developed university in this region.  This university has been added to the list and its construction would embark on this year expected to be functional in 2011 EC. 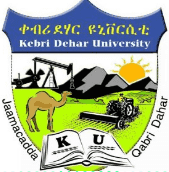